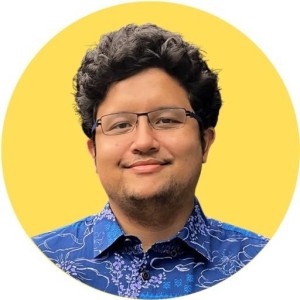 After a stellar group stage scoring seven goals that propelled him to the top of the score charts, Razzmir Ashraff was strangely quiet in the quarter and semi-finals where during the semi Vs. Kg Bahru Boss, he failed to register a single shot. Very uncharcteristic of a striker of Ashraff’s caliber. But the way this match went, it’s as though he purposely picked this match for him to rebound from that mini slump.

The KRU defence, having conceded two goals by Razzmir previously in the group stage, has once again been undone by the hotshot striker as he was involved in all three of Cyberjaya’s goals. First, he made a penentrative run into the KRU box and drew a foul from KRU keeper Illyasyak Adi to win a penalty. Then in typical Razzmir fashion, he duly coolly converts a low shot past Illyasyak for the 2nd later in the first half after making another penetrative run and promptly finished off KRU by converting into an open net for the third after being teed up by Saiful Aula.

Razzmir capped off a brilliant campaign with nine goals and deservedly be awarded the MVP of the tournament along with a spot in SCL 2021 Best XI.

If there’s ever an award for best mid-season signing of the season, Cyberjaya Teleflow’s Yazid Kamarazuan would win it by far. Cyberjaya had to reshuffle their midfield to accommodate the new signing by dropping Afif Ikhwanul and shift Hakeem Badri to Afif’s spot as a holding midfielder to play the deep-lying playmaker role. The change ultimately proved crucial in Cyberjaya’s run to the championship.

Having proved himself tremendously Vs. Shah Alam Klasiko and Kg Bharu Boss, Yazid once again proved important having scored the penalty for Teleflow’s first goal and provided the assist for the 2nd goal with an incisive through ball for Razzmir. With Yazid pulling the strings going forward, Hakeem relishes his new role as the holding midfield while Ahmad Nizam too can play a perfect pass with his vision and also finds himself in excellent positions to play it. Overall, Cyberjaya’s midfield revamp for the knock-out stages paid off.

If you’re in the KRU Port Klang camp, it’s hard to imagine the emotions you have to go through after losing the final again. KRU officially became the first ever team to reach the finals of the SCL twice, having lost the 2018 final against Puchong Fuerza 0-3, so a redemption arc is on the cards. Sadly, they faltered once again after they failed to make their early dominance count, losing 1-3 in the process.

Ismail Mamat and K. Ravindran spurned great chances in the first half to put KRU on the score board early and they were made to pay in the end as their backline couldn’t handle Cyberjaya’s incisive passing. KRU’s night went from bad to worse on the 56th minute after Aniq Kamal, who has been a consistent performer for KRU this year, was given a second yellow card for a mistimed challenge and ended the final with only 10 men.

Substitute midfielder Norismaidham Ismail made the scoreline more respectable deep into stoppage time by scoring one back for KRU, but it was far too late by then.

Unlike Cyberjaya who has a reliable goalscorer they can trust in Razzmir Ashraff, KRU didn’t have such a player this time which is surprising considering Rosedy Muslim’s exploits of five goals in the 2018 edition.

But instead, they spread around the goalscoring duties to pretty much everyone who is playing as a midfield, winger or forward. They scored a total of 16 goals in this year’s SCL and with Norismaidham’s goal, the midfield became KRU’s 10th different goal scorer, the highest number of different goalscorers for a team this season. Not only that, they also created a high number of chances prior to the final itself as well as Ridzuan Azly Hussham contributing six assists, proving he was difficult to deal with down on the wings by creating chances and drawing fouls to win penalties.

Their dreams may be agonzingly crushed once again having so close to winning it all, but you can count on KRU to bounce back and we’ll surely see them again in a future edition.

Cyberjaya Teleflow made their SCL debut in 2019 and if you compare their campaign then to now, you would be impressed with the progress they made. Cyberjaya were knocked out of the group stages in 2019, having failed to score the required 2nd goal on the last matchday that would’ve put them into the last eight, but could only win 1-0. The ended their campaign with a great defensive display conceding four goals, but theri dire offence of scoring only six was their downfall.

Fast forward to now and Cyberjaya underwent an amazing transformation to a menacing goal threat no matter which opponent they faced. By the time the group stage ended, Cyberjaya doubled their goal tally from 2019 to 12. They went on to score eight more in the KO stages, bringing their goal total in this year’s SCL to 20 with Shah Alam United being the only team they failed to score against having been held to a 0-0 draw. And all of this was achieved despite Cyberjaya Teleflow having the lowest amount of average possession of all teams with only 42.78% heading into the final, which shows the efficiency and ruthlessness of their attacks.